Where did you first see the Fosco Maraini photography?

The whole concept of the pearl diver, or the ama diver as they call it, is something I learned about on a trip to Japan last year and found out about this really amazing culture of women in Japan who would harvest the pearls with very little technology to go on. It was a really compelling story about this culture that lived very close to the environment and was uniquely female. So, I had heard about that and was pretty interested in that as a story itself and then I saw the photographs and really wanted to pursue using them but with permission -- in the right way. I didn't want to just take them off the web. 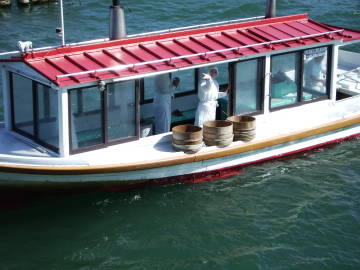 So, I actually had to find the book that was first published that contained those was out of print. The photographer, Fosco Maraini, had passed away in the '70s. I was really desperately seeking for a way to get permission for this. I found out that he has a surviving daughter who's a playwright in Italy. An Italian-speaking friend put me in touch with her to request permission. It turns out she doesn't own the rights to the photos that her father took, but the Ministry of Culture in Italy does. So, I requested from their photo archives the use of these two pictures that you see in the packaging. They granted it and that was able to put the whole picture together for me what I wanted to see in the whole concept that you were talking about earlier of beginning, middle and end and a cycle of ascending and descending. That was important to me that we did it and did it the right way and gave credit where credit is due.

How long did that entire process take?

Tracking down and researching the photos was maybe a couple of weeks, to go back and forth with the institute in Florence that granted the permissions. Probably two or three weeks, all told. The packaging work and fabrication was part of the pressing of the CDs, too. I was lucky to have a friend who speaks Italian, otherwise I would have never made it.

Had you made the trip to Japan before your benefit for the Japanese Red Cross at Marx Cafe?

That was before. I had really been impressed. The whole trip was important to me. My wife is Japanese, so it was an important trip for us to take together. Then, when we came back months later and realized that these disasters had occurred and touched on places we had visited, I just knew that there was something we could do as a band and got together with other DJs and artists and put together a night that raised some money for Red Cross Japan. That was really a small thing that we could do, but an important one for me, personally.

It sounds like the current sound of Sansyou is not the original sound that the band was going for.