Join me for a birthday party at ANS TV Baku Azerbaijan...find out what really happens at TV stations!

Aynur, my host's daughter, who worked as a TV reporter for ANS, which is the CNN of Azerbaijan, invited me to join her staff for a birthday party at the ANS TV office.

First, she bought a humongous bouquet of flowers from a florist who fancied it up with lots of filmy paper.

The journey to the ANS TV Baku Azerbaijan station took us down VERY deep escalator shafts to the metro system. I'd been on lots of escalators in large international cities before, but never remember any being this deep. 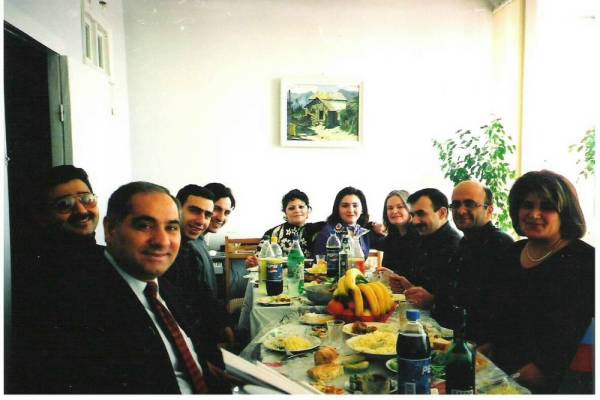 
There's a saying in Azerbaijan that if someone pokes a hole in the ground, natural gas comes out--I expected to be fumigated any second while descending down these seemingly endless escalators.

Birthday parties at the ANS TV Baku Azerbaijan are an experience. 10 employees and my self sat around a large table filled with flowers and the food, which had been brought by the female employees, "poured" in.

I ate to my heart's content at the ANS TV Baku Azerbaijan birthday party from the variety of traditional Azeri dishes and soon was filled to capacity--then to my astonishment more dishes arrived at the door...the main courses. Shocked and wondering how I could possibly eat anymore, I commented, "Ohhhh, there's more!"

They informed me that there also were lots of desserts coming also.

What a lesson for me---eat sparingly, one never knows what's coming next.

I could only eat a little of the main dishes and barely any dessert.

Our glasses were kept full of wine. As I don't regularly drink wine, I've learned not to empty my glass too soon.

The director of ANS TV Baku Azerbaijan, who joined in and also sort of read a newspaper at the same time, turned my way and said, "We are in a good mood today because you're here!"

The birthday lady opened her gifts (I'd brought many gifts with me to Azerbaijan from the Naeir program at our church, so brought her a gift, but don't recall exactly what it was).

The men started quizzing me about American politics.

They asked, "What do you think of President Bush?"

I replied, "I respect him very much because he's a Christian man." I shared with them that I'd spoken with George W. Bush when he was campaigning in our city. He personally told me that he'd accepted Jesus Christ as his personal savior.

Then they asked about Clinton. I told him I was ashamed of him and he'd brought disgrace on America.

"We like Clinton. For us, having a mistress is normal. It shows that a man is strong," they said.

I gave them each a small pocket atlas of the USA. Taking turns they handed their booklet back, asking for me to sign them.

This farmer's wife from Iowa felt like a momentary celebrity and I was glad that I knew how to spell Azerbaijan. I wrote in each: "God bless (their name) and Azerbaijan!" Then I signed my name.

By now, very happy with wine, they said, "It's time to dance!"

All this on a work day...I wondered how the news reports got done!

We moved into a sound room and music was turned on.

Typical dancing with hands extended in front with snapping fingers started and I joined in laughing and having lots of fun.

After a short time and gathering around for a photo, reality approached and the news must be ready...thus the end of a perfect ANS TV Baku Azerbaijan party.