I don't remember how this English pen pal thing got started..it was probably through one of my friends, Muriel or Pam...but somehow all three of us ended up with pen pals from England.

If I told you we were teenagers in the 60's and the Beatles were our favorite music group, would that answer the question?

Pam, Muriel and I had a common motto: "England or Bust!"

Pam and Muriel made it to England lots sooner than I did...but I've made up for my slowness in ofteness (is that a word? If Ogden Nash can make up words...I guess I can too.).

Funny, England is really the only place I wanted to go and on my first overseas trip to Europe, I drooled as we only flew over this emerald in the sea.

But, the topic here is Penpals from England....so I'll try and stay on target.

My English penpal was Christine Dunton. She wrote the most amazingingly neat letters in a unique script. I would put on a photo of her letters here, but I can hardly believe this myself...I can't find her letters.

I can't imagine me throwing them away. I usually don't throw things like that away.

Maybe someday they'll pop up on one of my "really get down to cleaning searches."

I carefully kept all of my English penpal's letters and tokens of friendship in a box...it's gotta be here somewhere!

My English penpal amazed me not only with her neatness, but with her punctuality and thoughtfulness.

I remember trying so hard to match her in neatness and reliability.

But usually, my letters to my English penpal started of with a grand apology...."Please forgive me for not writing sooner!"

Once, I decided to use a fountain pen like my English penpal obviously did. Only my attempts ended up with big blue blobs (mistakes) here, there and everywhere.

I remember proudly displaying my finished letter to my older brother, Duane. His quick comment was, "You're going to send THAT?"

Yes, I probably did send "THAT". 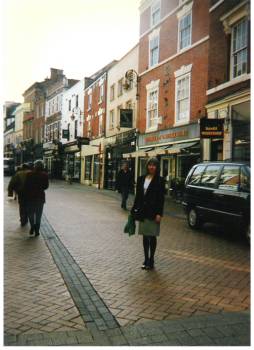 
Funny, I never really took responsibility for my sloppiness.

All I could really think of is: "Wow...education in England must be vastly superior to ours here in the states!" 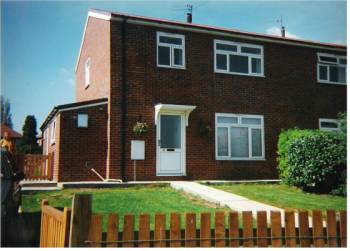 Christine's Home when we were Active Penpals

My English penpal, Christine and I had many things in common...sewing, cooking, music, boyfriends, you name it , we shared about it in our letters. We passed material samples, magazines and poems across the pond to one another.

Plus, small gifts would arrive occasionally from England and vise versa. I could never match Christine's though in quality and uniqueness. I still cherish a jade necklace carved into a rose. 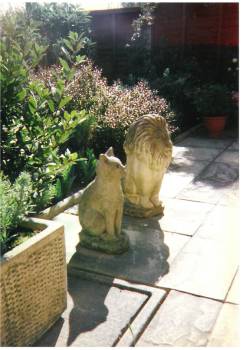 
Our letters were more than letters. They were documents. Documents of our lives.

I've never quite had the sensation of the type of love I felt when visiting Christine's neat minimalistic home, she produced a small box containing every single piece of correspondance I ever sent her, including all the little what nots that would get stuck into an envelope.

She graciously let me browse through my letters, which now belonged to her, not me. I almost felt as though I were intruding on someone who really wasn't me. I was in totally awe and amazement...that here I was in a home in England, looking at the most detailed documentation of my life, ever possible. Even my mother's own accumulation of my drawings, school pages, photos, letters, etc, couldn't match this detailed expose on my life.

Here I shared intimate feelings, thoughts, dreams, plans, and yes, experiences with someone I'd never met...and she held the records right here in this little box. A diary wouldn't have compared. Diary details never compare to actually writing to a human being, and one your own age, who lived in your dream country to boot. 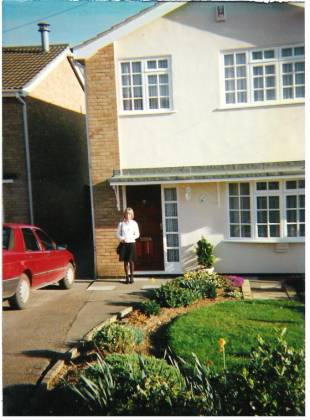 
I was overwhelmed with a sense of being loved. Here, this stranger, well...not a stranger, but this person, who I only knew through the written word held me in her box and kept me on her shelf which held only a few valuable and carefully chosen possessions.

Now, if I'd been a daughter, mother, aunt or niece, one would expect a sort of obligatory saving of letters...but here, there was no obligation, only love.

Even after a gap of several missing years...the letters were cherished and kept.

Fortunately, Muriel kept in better touch with Helen, her English penpal, than I did with Christine, my English penpal, so when my time to visit England finally happened, I was able to easily contact Helen, who in turn did a search for Christine, and found her.

To think that I maybe would never have found her...with so much of my life tucked away in that extraordinary little box!

During my time in Derby, I stayed with Helen sleeping on the hide-a-bed in their living room, which meant that I couldn't go to bed until the last home video was finished, but also meant that Peter, her husband could easily offer me tea before rising.

That's a great custom in many English homes...husbands bringing their wives tea before they get up.

Start writing letters to someone across the pond, sea or ocean...maybe to an English penpal, who will cherish and keep every line for 40 years without fail and then let you see them after the gray hairs start to show and youth has flitted away.

Even upon arrival to home and the approach of our silver anniversary for which we barely remembered ourselves...here comes a gift from England, from my longtime friend, Christine. Yup, an appropriate silver photo frame...our only anniversary gift. It's right here on my antique pump organ...Christine's silver frame and a photo of Mark and I.

Thanks, Christine, Helen and Peter...for everything!