The Great Wall of China -- is it really possible that I've visited it three times? 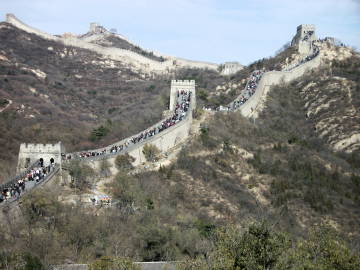 Great Wall of China--Photo by Kari


Years ago I bought a needle pointed pillow of the Wall of China at a garage sale and thought to myself, "Someday I will go there." It was funny, how having that pillow increased my faith.

Yes, it is, even though the second time I didn't actually walk on the wall, but enjoyed buying many things from the shops down below. My 84 year old mother, John and I were on that trip and after mom took one glance at that monstrosity, she decided it was a "no go" for her. So I stayed behind and we had a blast shopping, shopping, shopping. There were tons of bargains, which is not uncommon for China. I brought home pieced quilts and a crocheted table cloth. One pieced quilt I did lots more quilting on and sold for a hefty profit. Another I sold, as it was, for a tidy profit and the crocheted table cloth was a great donation for my mother's annual church bazaar at Rock Valle Lutheran Church in Echo, Minnesota.

The Chinese people loved my mom....she's great fun and a easy target for haggling. There were many laughs, believe me.

And my mother summed up the Great Wall this way, "All that work. Such a waste of time." That's my practical mother for you.

Mark and I visited the Great Wall of China first Mark, a friendly fellow, makes him a pleasure to with as he makes friends everywhere, even on the Great Wall.

But I will talk on this page about going to the Great Wall with Sam and Matt, which was my third time there.

My children have picked up my disdain for tourist traps, which sometimes backfires on me. After all, there are just some things one NEEDS to see, whether it's famous and seen by all or not. So, when Sam and Matt insisted on NOT seeing the Great Wall of China, even though we were in Beijing and not far away....I had to be even more insistent that we DO. But, we made an adventure out of it and bypassed the expensive tour guide route, which is the easiest way to get there and "do that".

Instead, we scrutinized the "Lonely Planet" guide for the cheapest way to get there, which was taking a local bus, etc. Just finding the right bus stop proved challenging and one thing that is forever embedded in my mind is the group of three Mongolian type females we encountered that day. There were two women and one little girl, dressed very out of context with everyone else, rugged, layered, strong, determined and they seemed to have permanent smiles fixed on their faces. Even the little girl had developed this admirable hardiness as she toddled to keep up. I got the feeling they could trek for days on end without tiring. I was entranced by them and still think it was a sign that we should have gone on over to Mongolia....I missed that one. Sometimes that happens. I really wrestled with that one...go, no go, go, no go...We must go forward, however, and be more sensitive next time.

A sidelight about our trip was that we just happened to visit three (Korea, Japan & China) of the four countries that President Bush visited a few days afterward....except we, unfortunately skipped Mongolia.

Well, thanks to Sam and Matt we found the right stop, and I managed to get myself trapped on the wrong side of the fence...they rescued me, thankfully.

So, we took a "people's bus" there along with three other brave tourists, who also must have toted the "Lonely Planet". I love these books, but sometimes they are so incredibly thorough that they take all the thrill and unexpected out of foreign travel. I remember the freeing feeling I had when we finally reached a town that wasn't in "the book". "Well," I told the boys, "We're on our own, at last...."

I don't think there's a soul on earth who wouldn't be impressed with the Great Wall of China. I could tell that even Sam and Matt were in awe and glad they made the effort....although, you know how teenagers are, they didn't exactly express that in words to mother.

Even though I consider myself quite fit and can swim for extended lengths of time without stopping....stairs tire me and I'm really poky and slow....so Sam and Matt flew on ahead up the myriads of steps to the highest point and beyond....and even beyond the beyond, much farther than I cared to go. 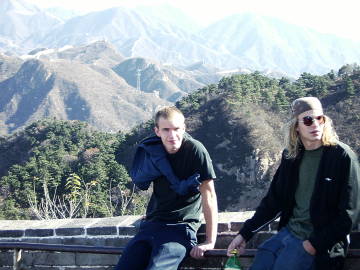 Sam and Matt on Great Wall of China Photo by Kari


As they were exploring, I had time on my hands to enjoy the view....and what a view! As you can see by the photo on top, it was a busy day with lots of tourists, but for some reason we went to the left and most took to the right, so it was much quieter where we were and that gave me opportunity to make friends and pass out gifts.

I love giving things away when I travel. The only problem is that gifts, no matter now small, must be carried and all that adds up to weight....another good reason to bring some of my children with me when I go places. They are happy to be useful and fill the extra space in their back packs with little gifts, although, I will say that I've cut down considerably on the amount of stuff I bring to give away. I used to bring ridiculous amounts of gifts. (Don't ask Anna about Paris.)

So, you can see these happy smiling faces of workers on the wall. Some are showing off my gifts and one is showing off my "Lonely Planet" guide, which luckily Sam remembered to gather up from her before we left. 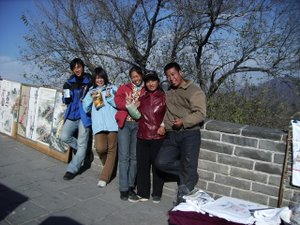 
The fellow on the left, a talented artist, was especially kind to me and grateful for my present to him. You can see his detailed paintings on the wall behind him. He surprised me by secretly sticking a folded up piece of paper in my hand and explaining quietly that it was one of his paintings as a gift for me. "I really don't get much for them, anyway", he said. "My boss gets most of the money. I want you to have this."

His boss wasn't far away, so he had to be very secretive, which made his gift a real treasure to me. This group of young people, who live close by and work on the wall every day, endeared themselves to me. I wondered what it must be like living so close to such a monument.

Finally, Sam and Matt found their way back to me and we headed down, which was much easier than going up. At the base, there was a fantastic 360° slide show/movie in the museum. It was worth every minute and kept us turning every which way trying to capture the re-encounters and history of the wall....a very thrilling and creative media presentation.

Now....going home was another matter. It was back to the "people's bus". Here's where a nice tour guide car would have been welcome...we could have just jumped in and buzzed off on our way home to Beijing.

But, no, no jumping in anything and buzzing off. First, we had to get to the stop which meant passing many shops and many desperate shop keepers. I'm a real pansy when it comes to hagglers....I'm too nice, I guess. Growing up in the Midwestern USA just didn't prepare me for being rude and ignoring folks who are desperately trying to get my attention.

One woman was especially insistent, to the point of absurdity, almost, except that I must have indicated an openness to some how encourage her pleas for a sale. I simply must remember not to touch anything or show interest unless I really am thinking about the possibility of a purchase.

The poor dear must not have had a sale all day and her furs were amazing, especially a long white one. She sensed my curiosity and followed me all the way to the bus stop, lowering her price consistently at each interval. Boy, I forget, but I think the starting price was something like $80 and by the time we reached the bus stop she'd come down to $2. I offered her $1. No, she said, she needed to make at least $1 for herself. Well...I bought the tanned white (fox?) skin, which is very lovely and has a mechanism that makes the mouth a clamp. I'm really thrilled with the purchase and the price, but the pestering was a bit much.

Now...getting onto a bus. That's an experience at the Great Wall of China. Again, growing up on the Midwestern USA just doesn't prepare us for things like that. Lines? No such thing. Waiting patiently for one another? No such thing. Letting someone go ahead? No such thing. Getting on if you're right by the door? Barely possible.

Drivers of smaller buses sensed out plight and offered us expensive trips home, but we became determined to be miserly and take the cheap ones.

So, how does one get on a bus at the Great Wall of China? Well, after missing several buses, because we were not so nicely pushed out of the way, we came to the realization that that is the only way to get on a bus! Now, here's where Sam and Matt really helped me out and finally, we too, joined in the pushing and shoving to secure a place for us on a very crowded, with barely breathing room bus.

Folks were quiet at the end of a hectic day working on the great wall, except for one man who sang! It was so lovely--quiet, gentle music that wafted it's way through the bus. Everyone listened and were soothed into tranquility. Very hypnotic and peaceful. I really wondered about him and couldn't help staring at him as he was just across the aisle from me. Was he a believer? Did he love Jesus? Was this his way of ministering to those around him? Why was he so brave to sing so everyone could hear him? So many mysteries, but it made the crowded, stuffy ride back to Beijing more than bearable.

Read more of my adventures of world travels after my visit to the Great Wall of China.