The pearls in the cross surmounting the crown have a weight of thirty-six grain.

The imperial cross of the Imperial Austrian Schatzkammer is profusely ornamented with pearls in front, while the back consists simple of silver-gilt. There are three strings of pearls in the front running in each direction. The total weight of the pearls is 4092 grains; one weighing sixty-four grains, and the smallest two grains.

The crucifix of the Golden Fleece in the Imperial Austrian Schatzkammer is ornamented only in front with pearls; these have a weight of but 136 grains.

The crown is adorned with two rows of pearls, weighing respectively 960 grains and 840 grains, while the ornaments and eight large drops weigh 2052 grains. The largest pearl on this crown weighs 104 grains. It is drop-shaped and belonged to Rudolph II; it is slightly uneven and the color, although white, is not that of a new pearl, but this pearl has a positive history of three hundred and six years, and at the present time is probably the oldest known unchanged pearl with a direct and authentic record. 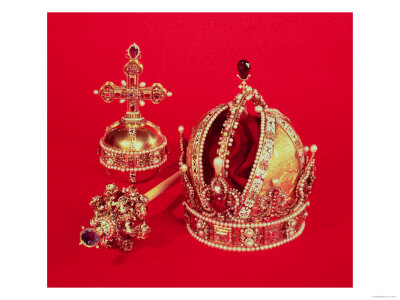 Coronation Regalia of Rudolph II, Emperor of Austria, circa 1576

The imperial orb in the Imperial Austrian Schatzkammer is studded with pearls weighing in all 1560 grains. Four of these weigh forty grains each, the others are of lesser size, the smallest weighing ten grains. The scepter is adorned with pearls to the weight of 300 grains. 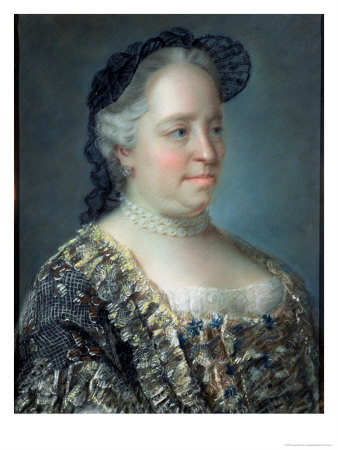 In addition to these insignia and regalia there are in the Imperial Austrian Schatzkammer two magnificent pearl necklaces, deposited by Empress Maria Theresa in 1765. 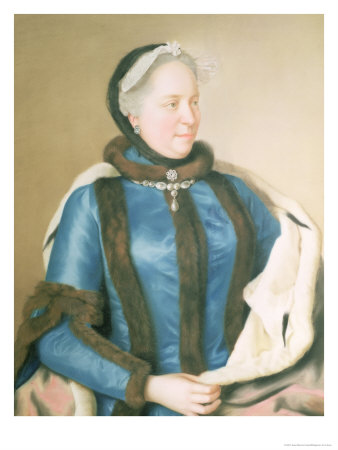 Empress Maria Theresa of Austria, circa 1770

The first consists of a single string of 114 large size pearls with the "Baden Solitaire," a diamond of 30 carats, as a clasp. Three of these pearls weigh from 92 to 100 grains each, and the whole string has a total weight of 3400 grains. This would give us the following values, the pearls averaging 29.82 grains.

The other necklace contains 121 pearls of total weight of 3788 grains, arranged in three rows; these pearls average 31.3 grains, the largest weighing forty grains and the smallest ten grains. The necklace has a diamond clasp of 14 1/32 carats. The pearls are worth:

Two bracelets with brilliant clasps, belonging to the same set, and consisting of 240 medium-sized pearls weighing 2800 grains and averaging 11 2/3 grains, have the following values:

There is also a pendant of six pearls, weighing 300 grains and averaging fifty grains; these pearls are worth:

Another necklace, bequeathed to the treasury of the Imperial Austrian Schatzkammer by the late Empress Caroline Augusta, consists of eighty-six pearls disposed in two rows, the largest pearl weighing seventy-two grains and the smallest eight grains. The total weight is 2600 grains and the average, 30.2. This necklace is worth:

Still another necklace is composed altogether of black pearls of which there are thirty, the largest weighing forty-eight grains and the smallest ten. The total weight of this necklace is 1040 grains, an average of 34.6 grains for each pearl. On a base of $5 this necklace is worth $180,150.

The diamond crown of the empress bears pearls to the total weight of 200 grains; among them are four weighing 100 grains each. These pearls alone, on a $5 base, would be worth $200,000.

The so-called crown on Charlemagne bears the inscription: "Chuonradus Rex Dei gratia Romanorum Imperator Aug." It is believed to be the work of the twelfth century and originally the royal crown of Conrad III, king of the Germans (1093-1152), the first Hohenstaufen. (Winckler, "Die Reichskleinodien," Berlin, 1872, p. 17.)

The arch is said to have been added to adapt this royal crown for use in the expected coronation of Conrad as emperor. He died, however, while making preparations to his journey to Rome.

Information on the Imperial Austrian Schatzkammer as recorded in 1908 by Kunz and Stevenson in "The Book of the Pearl".