I remember few actual facts about the maiden tower in old Baku, other than that legend says a maiden threw herself into the Caspian Sea from the top.

Land, however, has been apparently reclaimed making the tower no longer directly on the Caspian shore. 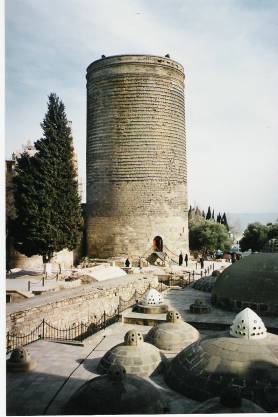 
Upon entering this gorgeous door there is a museum and gift shop. The gals assured me the items such as ancient swords and shields were copies and not the originals. 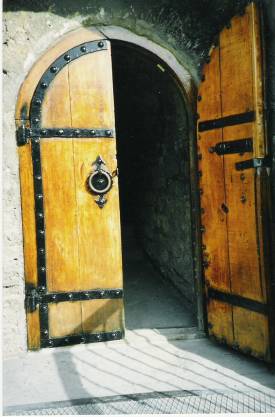 
The tower is also estimated to be very old, some estimates say 2,000 years old and if I recall correctly, there is a well in the tower, so during times of siege the folks had water.

It's constructed in an interesting manner with an appendage, which is not visible from this photo I took. If you slip on over to Wiki, you can see the connected wall, which added lots of strength to this tower. 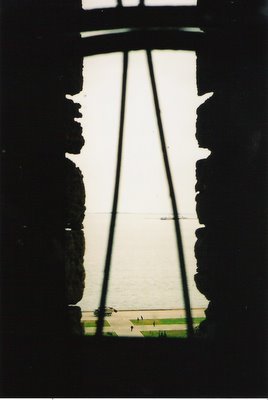 
I love this photo that I took, because it give a rare peek at the Caspian Sea. Usually the Caspian Sea is looming large when you're in this part of Baku, but here you only get a peek and can barely get a glimpse of its immenseness.

The Caspian Sea is the largest body of water on earth that is enclosed by land.


I must have taken this photo of Baku Bay and the Caspian Sea also from the tower. I wasn't any other place so high up to get such a great overview shot.

This photo typifies my overall impression of Baku when I was there. It was still quietly emerging from communism and there was an overall "grayness" to everything.

There is also a Maiden's Tower on the Bosporus in Istanbul...I think I have a photo of that somewhere too. It's a lighthouse sort of place that can't be missed when crossing over from the Asian side of Istanbul to the European side or vise versa. That tower was in the James Bond movie, "The World Is Not Enough".