On the rolling deck of a dhow in the summer of 1964, an unknown pearl diver plucked this tiny scrap of wood off his nose and handed it to a young French documentary filmmaker called Alain Saint-Hilaire.

In this fragile "Y", carved by hand, is a vanished world of incredible hardship and physical endurance that exists now only in the memories of a few old men. Known as al fitam, it could also be made from tortoiseshell. 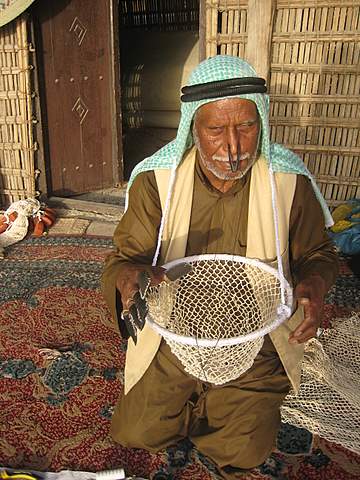 By the time Saint-Hilaire arrived in Dubai, the pearl diving industry was in the final stages of a long decline that had started in the 1930s when the Japanese discovered how to mass-produce cultured pearls.

Until then, pearl diving had been the main industry along the Gulf coastline, offering the chance of great wealth, but also the possibility of crippling disability and even death.

Equipped with little more than this plug and a collection basket, divers would descend up to 40 metres to pluck oysters from the vast undersea beds that stretched from the cape of Ras Tanura in eastern Saudi Arabia to Dubai.

Divers worked without pay, instead receiving a share of the proceeds once the catch was sold. With perhaps one oyster in a thousand containing a pearl, the stakes were always high. A single pearl could fetch the equivalent of hundreds of thousands of dirhams. A single mistake could end in drowning or a crippling attack of the bends.

More about Nose clip worn by a Gulf pearl diver