Saltwaters near The Philippines

Possibly the second largest pearl ever discovered and documented, surpassed only by the renowned 14 pound (approx 31,893.5 carats) “Pearl of Allah” (so-called because it resembled the turbaned head of Allah), the present pearl is the product of the giant clam shell Tridacna gigas found off the coastal waters of the Philippines. 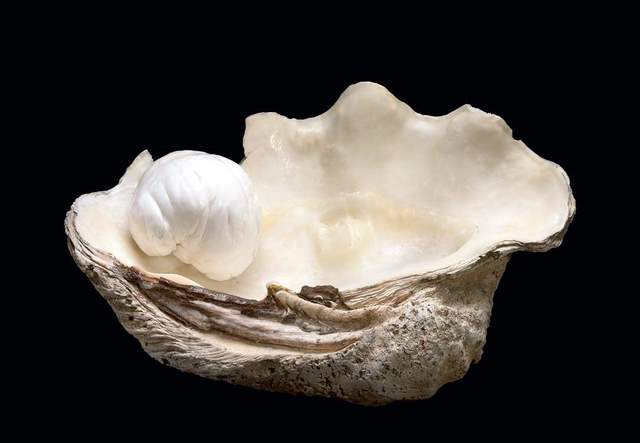 Almost any shelled mollusk can, by natural processes, produce some kind of “pearl” when an irritating microscopic object becomes trapped within the mollusk’s mantle folds and the conditions are correct. Interestingly, not all “pearls” are made of nacre, that combination of aragonite (calcium carbonate and conchiolin that is secreted from a mollusk and layered together to form what gemologists call a “nacreous” pearl. Some marine animals—namely snails and clams—produce gorgeous gems made up of non-nacreous calcium carbonate. Calcite, rather than aragonite is the primary material here and they are, thus, technically classified as calcareous concretions. The pearl which is not “mother-of-pearl” might best be qualified “porcellaneous.” It indeed possess a brilliant luster like porcelain, a hard resistant appearance, and occurs in a variety of colors according to the species producing it. The Tridacna gigas was first described by Lamarck in 1758, and is known as the true “Giant Clam”. Reaching lengths of greater than 4 ½ feet (1.4 meters) and weighing hundreds of pounds, they can live well past 50 years of age. This is the largest species of bivalve mollusk to have ever lived in the fossil record of our planet. They can still be found in the waters of the Pacific stretching from the Philippines to Micronesia.

The present example is an incredible, five-pound pearl—measuring six inches in diameter and bearing an uncanny resemblance to a human brain. According to the gemologists who examined it and provided a certificate of authenticity:

“This is an once-in-a-lifetime look at one of nature’s most unique treasures,” said Mitch Jacubovic, director of EGL USA. “A pearl this size is not only one of the largest ones we’ve ever seen, it is among the largest pearls ever seen anywhere.” David Bidwell, a senior appraiser with Universal Gemological Services, called it “clearly one of the most valuable pearls of its kind in the world today.”

Accompanied by half the original giant clamshell showing the point of attachment where the pearl formed.