Gulf pearls have a language of their own. For them to reach the right price at market, it was first necessary to grade them both by size and quality.

The most precious pearls were al jeyoon, free of blemishes, almost pure white in colour and perfect spheres.

In addition to colour and shape, pearls were ordered by universally agreed sizes. These brass sieves, from Abu Dhabi, would have been an essential tool used by local merchants to sort the catch for resale. Al daneh were the largest and most valuable, with five more grades down to the tiny al bookah, little larger than a grain of sand. 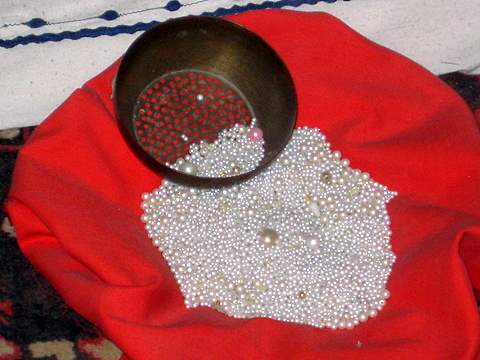 "Big pearls were a fantastic find and everybody would be celebrating," says Frauke Heard-Bey, the Gulf historian who collected the sieves, "but most of them were small.

"So in order to assess what the value of a handful or bagful of pearls would be, they had to be graded by pearl traders. So you had gradients of holes in the sieves. The first one would retain only the big pearls.

"Next one retains the smaller ones and so on. Then one gets what are called seed pearls and these were often just used for clothes."