Visit to A Restaurant Azerbaijan

A visit to a restaurant Azerbaijan did not really need to materialize, because my host family was totally hospitable and when I suggested I take them out for at least a cup of coffee....to them it was "out of the question"....why spend money on something unnecessary that could be provided at home cheaper?

That was their mentality and rightly so....manat was not easily acquired. That's their currency. 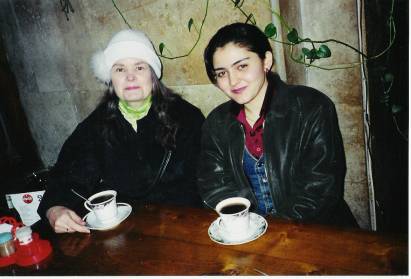 Me (Kari) & Ayur in a Restaurant in Baku


At the time I was there, an average school teacher's salary was equal to $30 per month...yes, that's month!

One night, however, as the "girls" or we ladies of the house were out strolling around Baku, I did persuade them to let me buy them a cup of tea in a restaurant Azerbaijan...see above photo as proof.

When I say strolling....I mean strolling. Strolling is quite an art in Baku. I had much to learn. We midwestern Americans walk in a totally different way than Bakuians (is that a word?). Ayur was constantly telling me, "Yavash! Yavash!" Yavash means slowly, slowly. They were teaching me the art of strolling.

To them strolling is entertainment. You don't speed walk, power walk, or even walk! You stroll! Slowly!

I don't think the waitress at the above restaurant Azerbaijan was very happy that we were taking up valuable space for just buying tea, but we decided to enjoy ourselves anyway. It was a busy evening and probably even a weekend, I don't exactly remember, but the boulevards of Baku were full of black leathered or fur coated strollers....no not the baby-carrying kind.

I also visited a restaurant Azerbaijan that was actually a pub, sort of a transplanted Irish pub in downtown Baku. Ayur's father took me there on the day it was his turn to show me around.

That day was very paradoxical for me. Here I was, a woman who grew up during the cold war with Russia often fearing a communist takeover or attack, being shown the historic sites of Baku, Azerbaijan, by a former communist Russian soldier who was still very much an avid communist.

He took me to the pub and the owner, a friend of his, gave us a free cup of tea. That makes two cups of tea in Baku. I was blessed in restaurant Azerbaijan.

As I normally don't frequent pubs, I felt a little awkward, besides feeling very awkward having a former Russian soldier as a tour guide. I declined his offer to play a game of pool. Even though I'm not really that bad at pool and sometimes practice on our own pool table.

It was an interesting day, but a very quiet one. He knew no English. I knew no Russian.