Tennessee Pearls Featured in Paris in 1900

The September 2, 1903, Chronicle carried this note on page 1, “Enormous Pearl Found.” Hugh Evans, of Clinton, found a pearl in the Clinch River last week that weighed 117-1/2 grains, and was bought by a liveryman named Wallace for $1,450. It is the second largest pearl in the world and Mr. Wallace expects to receive at least $5,000 for it from Tiffany, the New York jeweler. It is egg-shaped and about three-fourths of an inch in length.

There is a Tennessee Historical Commission marker, 1D20, in the Hoskins-Lane Market Place Park in historic downtown Clinton, Tennessee. The marker reads, “The Market Place of Pearls” From about 1895 to 1936 Tennessee was one of the nation's six leading states in marketing pearls. Clinton was listed as one of three Tennessee towns known as centers of the pearling industry. New York dealers came regularly to Clinton during the pearling season. Saturdays were trading days for pearl hunters and buyers. In 1900 Clinch River pearls were featured at the Paris, France, Exposition.

A New Jersey newspaper article of 1908, gave an interesting story of Joseph Gossett, aged 42, of Clinton, Tennessee, the center of the great pearl hunting industry. Mr. Gossett had contracted malaria and lost his eyesight, but continued to be a successful pearl hunter with the assistance of his sister. The shells from the mollusks were sent to button manufacturers and made into mother-of-pearl buttons. 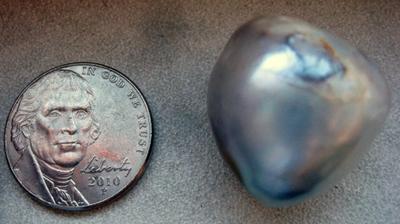 Source for Tennessee Pearls Featured in Paris in 1900.