A single Malawi tropical storm can greatly damage a village.

During a recent trip to this village in Malawi...it happened...a tropical downpour.

This severe weather came without much warning but as the sky darkened not many were concerned. The sky often gets dark threatening to pour out buckets of water...but then nothing happens. Maybe this was one of those times too.

Nobody was dashing about preparing for the downpour...so I also sat quietly under the tree enjoying the conversation. Inside I was thinking, "Shouldn't we start packing up things, like generators and stuff like that?" 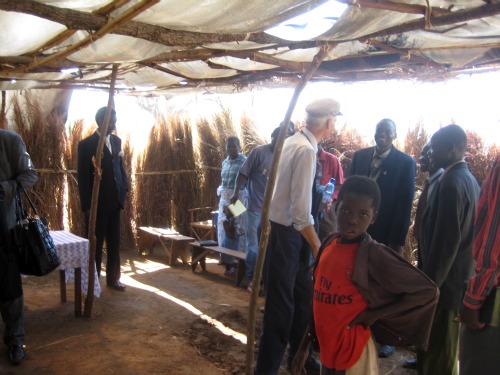 
But, no, everyone was calmly discussing the evening procedure which included sitting under this temporary structure....which I was sure wouldn't keep anyone dry at all.

Then there were a few sprinkles, ever so few of them. Still everyone remained in their places, calm and ignoring the now faster recurring drops of rain.

I didn't panic, but was thinking, "Wow, I don't really want to get soaking wet here, let's do something". I mentally planned the quickest route to the van, which as far as I could see was the only waterproof place around. 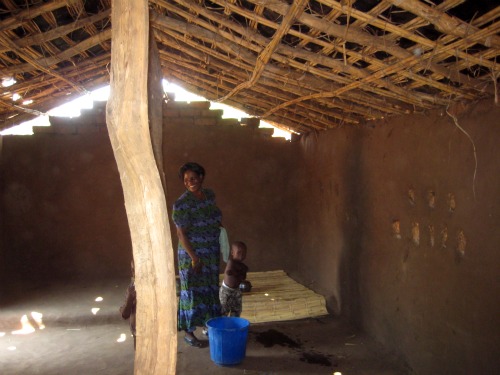 
Even the permanent church structure had no doors and holes in the walls for windows. No escaping the pounding rain there especially if the wind increased.

Somehow the thought of rain mixed with lots and lots of dust didn't appeal to me at the moment.

I found out the next day, entire houses can be "melted" away during the rainy season, requiring a whole new house to be built. The local government has tried to persuade this particular village folk to move somewhere where so much flooding does not occur, but no, they'd rather die in their home village than escape yearly flooding. 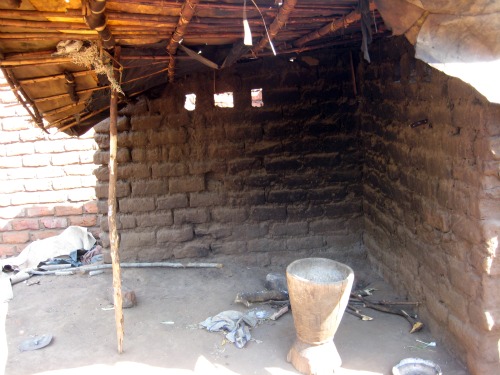 
The fact that the government subsidizes this village works counter to the attempt to get them to relocate....then they'd get no subsidies.

Sure enough soon a Malawi tropical storm downpour started and did not stop soon. Once the pelting rain began, it kept up relentlessly for several hours.

Yes, then there were mad dashes here and there and I ran to the van. Everyone took things in stride. I guess a lifetime of Malawi thunderstorms is just a part of life here in the bush.

Back at our lodge, I now realized the reason for curved sidewalks that make little troughs instead of being flat. They provide a fast way for water to flow in the desired direction instead of turning the court yard into a waddy.

We shut the small long glass panes which are identical to the ones in our greenhouse at home and were safe and sound from the driving rains.

But, I pondered, "What happens to a mud village after such a deluge?" I was to find out in the morning.

If a thatch roof is not strong and thick, yes, it leaks. If mud bricks are left out exposed, they can disintegrate....and fast. 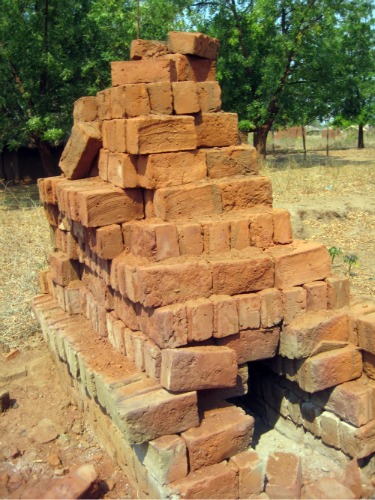 
This pile of bricks can look rather like a pile of mud after a downpour especially if they have not yet been "cured" or baked.

One house roof had disappeared altogether and the villagers were trying to help the owner regroup and build another roof.

The permanent church structure was filled with mud. The temporary structure had lost much of its reed walls and the roof. 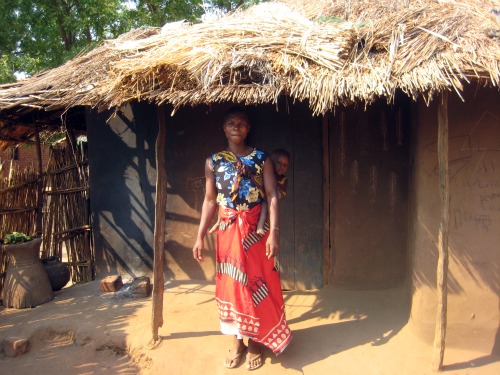 
Let's hope that Mary, who graciously showed us her house, will be safe after another Malawi tropical storm.

As the van returned to the village, it got stuck and the young men had to sleep in the van, which I do think was much dryer than any tent would have been anyway. They were all a little "wrinkly" in the morning.