Mighty Matt -
Just How Did the Interstate Highway 35W Come Into Being?

Interstate Highway 35W...Who would have ever guessed it had something to do with a new baby boy born in Muscatine, Iowa!

Once upon a time in the not so distant past little, well, maybe not so little, Mighty Matt was born. 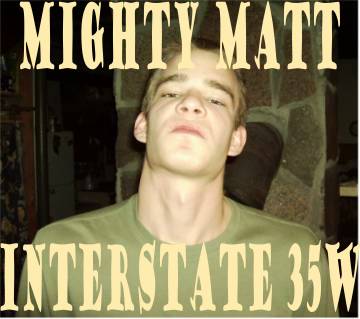 
His parents were sort of regular folk, but they knew the instant he was born that Mighty Matt wasn't so regular himself.

He was 10 feet long and weighed 200 pounds when he was a week old and he just kept right on growing!

His poor mama had to rest up for a whole year after having him!

He grew out of his shoes, his mittens only covered his thumb and he grew so fast his pants crept up to his knees in one afternoon.

Yup--he was quite a little, well...not so little, fellow that Mighty Matt.

His folks, Mark and Kari, added on the house in regular intervals to keep him sheltered.

By and by word spread around the country about this little, well, not really so little, fellow.

Word traveled up to northern Minnesota through the tall pines and Paul Bunyun and Babe, his great Blue Ox, got wind of the news.

Over the mountains Cyclone Kate caught the wind one day and it whispered in her ear, "Mighty Matt has been born in Iowa!"

It spread with the tumbleweed clear to Texas where Pecos Bill and his bronco pricked up their ears at the rumor.

But it was no rumor--Mighty Matt was an honest-to-goodness-true fable born in Muscatine, Iowa, USA--right on the banks of the Mighty Mississippi River. That's where he got his first name.

As he grew, he matured just as fast and before you knew it, Mighty Matt was a teenager.

Pecos Bill, Cyclone Kate and Paul Bunyan made regular visits to the newcomer to the Tall Tale Club and nurtured him along with their advice and told him funny story after funny story of all their adventures.

They laughed so hard that the Mississippi River overflowed its banks and nearly drowned the city of Muscatine...but that's another story...

But as soon as the foursome realized the commotion they were causing they changed their tune and kept things down to a dull roar and silly giggles which only caused small tremors in Muscatine County.

Of course they pitched in drying out the town and rescuing folks--so no real harm was done.

At one of their Tall Tale Club meetings Mighty Matt expressed an interest in learning a sport.

"Why--I'd like to learn rollerblading!" He told the group.

"Yeah! Yeah! Yeah!" they all cheered, knowing that every growing boy needs encouragement.

"But," they said, "that presents a problem....where will you roller blade?"

"No problem," spoke up Paul Bunyun, "we'll make him a path--a nice straight one across the country so he won't hurt anyone and on his days off from rollerblading we'll let the folks drive on it.

That way it will benefit America and Mighty Matt at the same time.

So the three of them, Pecos, Kate and Paul put their heads together while Mighty Matt went out to buy roller blades.

Walmart's roller blades were too small--in fact every store only had small ones so he special ordered some online.

Boy, was he anxious to get those roller blades.

Well, Paul, Kate and Pecos kept brainstorming away and decided on a brilliant plan.

Cyclone Kate would whip up a giant pot of black licorice taffy while Pecos Pete sweet talked the landowners and bought up land from Minnesota way down to Texas.

Paul Bunyan in the meantime hitched up Babe the Blue Ox--and cleared away the trees which helped Babe get into shape for some big pulling.

Now, these Tall Tale folks work fast and soon the black licorice taffy was ready for pulling and the pathway was cleared and Babe was itching to pull.

So pull he did. He started in Minnesota and as Cyclone Kate tipped out the taffy it was hooked to Babe's yoke and away he pulled. Paul Bunyan urged him on and on and on and they didn't even stop for lunch--well, maybe they had a quick bushel of apples--but only a little snack.

All in all it took them 35 Whopping minutes--so they named it interstate highway 35 W so they'd never forget their momentous contribution to their friend Mighty Matt and the good ol' USA.

Babe's reward? Why...he got to lick the licorice taffy bowl of course.

Boy, oh boy, Mighty Matt was itching to try his roller blades on that great interstate highway system 35W which was four lanes wide and plenty of miles to get himself up to a fast clip.

The waiting was horrible--the path, now christened interstate highway 35W, had to dry nice and hard and the special ordered roller blades were sort of slow at getting finished, but soon enough all was ready.

Cyclone Kate told him to wear a helmet and knee pads, Pecos Bill loaned him a whip just in case and Paul Bunyan strapped his ax on Mighty Matt's back for good luck.

So....Mighty Matt spent the night with Grandma Ose in Minnesota and Paul Bunyan joined them for a pancake breakfast on Grandma's farm in Echo. Then Matt, Paul and Babe headed out with his knee pads, helmet, whip and ax and set out for the new interstate highway 35 W...made especially for him.

Going through Iowa he stopped to roll up his pant legs and noticed something was caught in them so first emptied them out. They were filled with corn seeds and threw them far and wide to keep them out of his path.

The next year when he came through Iowa was covered with cornfields and the farmers all waved their hats and shouted thanks as he practiced his rollerblading on interstate highway 35W.

In Kansas he got a little itchy around his middle and realized something in his pockets was poking him, so he stopped and emptied out his pockets in Kansas.

He'd brought his mother, Kari, wheat seeds one day to grind into flour and the leftovers were causing the itch.

He threw them all over Kansas as he rolled on through.

The next year Kansas was full of wheat fields and the farmers waved their hats and shouted, "Many thanks," as he sped past on interstate highway 35W.

In Oklahoma he lost his concentration and took a spill--not just a spill--but a big thundering fall.

He tried to catch himself and flung both arms out while his fingers poked holes in the ground.

Black gooey stuff squirted out of every hole. Funny thing, this happened more than once in Oklahoma and the next year when he passed through there were oil pumps everywhere and oil men waved their hats and shouted, "Thank you, Mighty Matt!" as he sped by on the interstate highway 35W.

On he sped all the way to Texas on interstate highway 35W where Kate, Pecos, and Paul were waiting for him with some cyclone tea and biscuits.

Of course, Mighty Matt needed lots of practice with his roller blades, but every day he wasn't using the black licorice path he let cars drive on it and zip back and forth, north and south through the USA on interstate highway 35W to visit their families and see the countryside.

Sometimes his friends would rent out other interstate highways for him too, so he could be a good overview of the splendid USA.

Eventually Mighty Matt became too old for rollerblading and took up other interests, leaving 35W for cars, trucks and buses and all sorts of folks to travel on whenever they wished.

That's how interstate highway 35W came to be....well now at least it's a possibility.

Slip on over to Kari's main page here....after reading how the interstate highway 35W was created.

After reading the story about you and how 35W was created I felt overwhelming enlightened and so compelled to tell you a true story, indeed. Once upon a time long ago when your mother, myself, and your two uncles were very young we lived on a farm with our father and mother, of which were all very normal size, just outside of a small town named Echo in MN. And the town itself was so small that you could just barely hear an echo when you went through it.

Well, what brings me to write this is your friendship that you had with Bunyan, Babe, and all their friends. As we know Mr. Bunyan was a mighty lumberjack and Babe was stronger than you can imagine and they worked together in the forests up north. The part that I feel so compelled to tell you is that your Grandpa Ose was a lumberjack too and he worked in the forests in Washington state. He was in his 20 some years and was an adventurer like you and was making a living.

Your Grandpa and all the other lumberjacks stayed together in the lumberjack camps in Washington and they would have to rise and shine early in the morning and get ready early for work. Your Grandpa would tell me about the terrific breakfasts that the cook would make for them every morning. They had pancakes, eggs, bacon, potatoes, toast, and lots and lots of coffee, I guess that’s where "lumberjack breakfast" got it’s name.

Well, as time went on your Grandpa came home and settled down and married your Grandma and they lived on the family farm just outside of Echo. All of us kids eventually came along and our Dad, your Grandpa would tell us about Bunyan and Babe the Blue ox and how powerful Babe was. This was especially a nice story to tell and close to your Grandpa’s heart because he was also a lumberjack once.

So one day a long time ago when all of us kids were little, our Father & Mother decided they would take us to see Bunyan and Babe the Blue Ox way up north in Brainerd, MN. Since we had heard so much about him we were anxious to go and see him, so we got all ready and packed up some sandwiches to eat on the way.

When we finally arrived at his place it looked very big and it had a large door that you could enter. We just wondered what we were going to see. Well anyway we walked into the courtyard and saw Paul and Babe and we were just in awe of him. Wouldn’t you know it, Paul said hello to all of us and called us by our own names. He said "Hello Duane, Diane, Kari, & Michael and how are you today?" Ohhhhhh! We just got the chills and couldn’t believe how he knew our names.

So we decided that Paul Bunyan and Babe were not only of larger size but smart too. Smart just like yourself Mighty Matt and smart like your grandparents too, don’t you think? So I think that was really nice when you, Mighty Matt, had Bunyan, and Babe out to Grandma Ose’s farm when you went rollerblading through MN on 35W.

Well, Mighty Matt, that is another part of the story of where your friendship with Paul Bunyan may have started from. And that is the end of my true story with a "little twist".

And here's another twist...Paul Bunyan's Walleye catch on display at Garrison, MN. 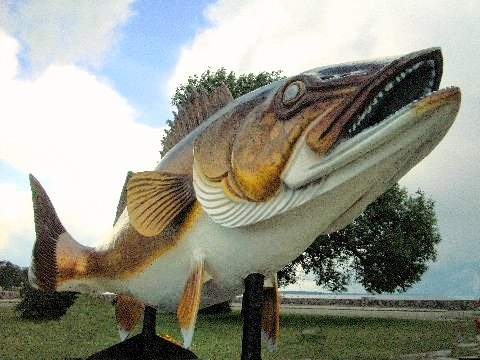 
Paul Bunyan and Babe caught the fish and after 3 days when it finally tired out Paul wrapped the line around Babes horns and Babe pulled in out of the bottom of Lake Milacs.