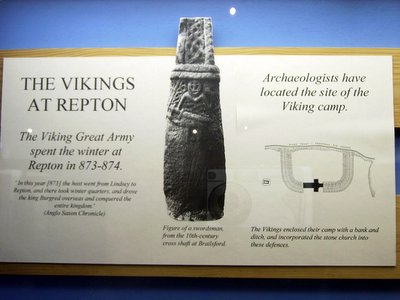 Great host of Norsemen in England...pillaging, plundering and conquering their way through this country...but what happened to at least 249 of them at Repton, with no battle scars to cause their deaths?

History well documents the presence of ancient Norsemen in England, but imagine the thrill of finding remains of their possessions and of the skeletons themselves...in a mass grave of human remains...see photo below.

On a visit a few years ago to my friends, Helen and Peter, at the outskirts of Derby, they pointed out in the not too far distance, the place where the mass grave of Norsemen found in England.

I thought, "Oh, I'd love to walk over there through the mustard fields." (At least they were fields filled with yellow flowers). But they discouraged me. Apparently it was much farther than it looked. I didn't even think of it at the time, but I should have at least asked for a ride so I could see the place for myself. I recall it was near a country church that we could easily see from my friend's back yard.

More recently, while visiting Derby, I had time to browse through the city museum and see the artifacts of these ancient Vikings.

Here is what I learned about the mass grave of Norsemen found in England...

An Anglo Saxon Chronicle records this: "In this year 873A.D., the host went from Lindsey to Repton, and there took winter quarters and drove the king Burgred overseas and conquered the entire kingdom."

The Norsemen enclosed their camp with a bank and ditch and incorporated the stone church into their defenses.

Archaeologists found several Norsemen warrior graves in 1985, at the east end of St. Wystans Church in Repton. West of the church stood a small chapel that the Norsemen made into a burial chamber. 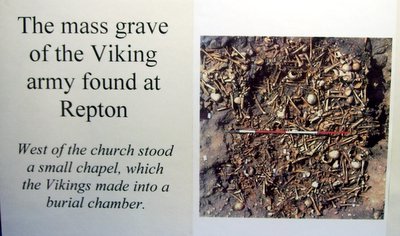 The bones of at least 249 people were laid around a central burial, perhaps that of a king.

Only one in five were women and the men were all aged between 15 and 45. Archaeologists think that these were men of the Norsemen warrior army together with local women. There were no traces of battle wounds, and these people probably died of disease. The bones were collected from their original graves to make this great Norsemen burial.

The burial chamber was covered by a mound of earth with kerb- stone. Four young men were buried together in a pit near one corner of the burial mound; were they victims of human sacrifice?

Read on to find out more about mass grave of Norsemen found in England...

Anglo Saxon Chronicles record the following: "In this year 874A.D., the host went from Repton, and Halfdan went with part of the host into Northumbria and Guthrum, Oscytel and Amund, the three kings, went from Repton to Cambridge with a great host."

Was this the occasion for such an extraordinary burial?

At the east end of the church in Repton, were several graves. One was of a Norseman warrior.

He had with him a sword and other personal items. He was killed of his battle wounds and buried in 873-4 A.D. 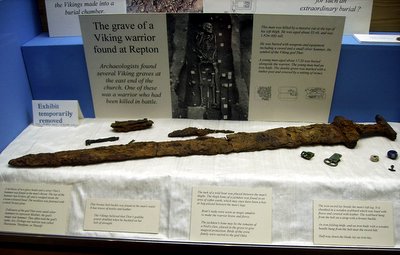 A young man aged about 17-20, was buried alongside the warrior. The young man had an iron knife. 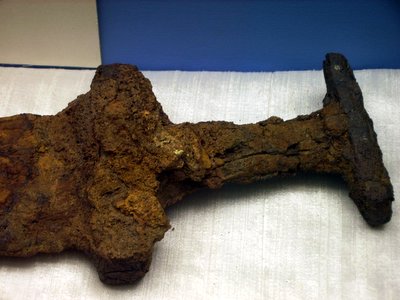 The double grave was marked with a timber post and covered by a setting of stones. 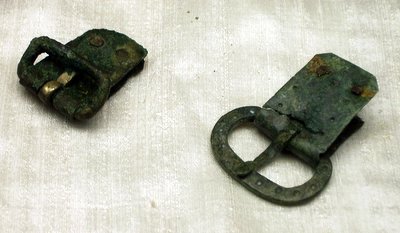 Another grave stone was this partial hog back tombstone. 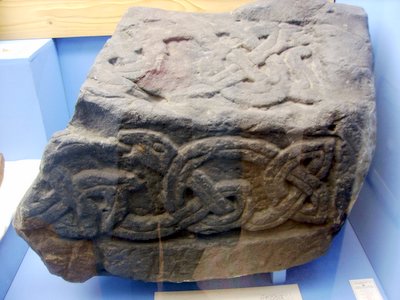 Fragment of Viking Hog Back Tombstone

The tombstone is in the shape of a house with a bear-like beast gripping each end. This type of tomb was the fashion of Norwegian settlers in Yorkshire and Cumbria, but is unusual in the Midlands 10th Century, found at St. Alkmunds, Derby.

These leather Viking shoes found at York had been waterlogged and preserved. 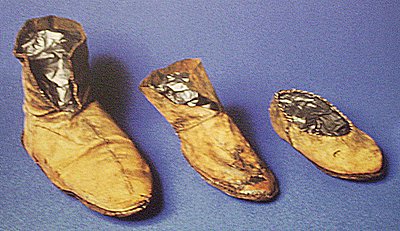 Also, at this museum in Derby was a Norsemen log boat which was found still with its cargo of quarried rock inside (very unusual).

Great time for a camera to run out of batteries though, right?...so no photo of this great log boat.

A wide flat river bed like the Trent had a high water table so conditions were right for preservation of the wooden boat.

The boat had been preserved in ideal waterlogged conditions for hundreds of years.

Sooo....really with all this Norsemen activity in England why aren't we all speaking Norwegian instead of English? Well...that's another chapter in English history...