I discovered a Welsh Rarebit recipe as a young bride in a Betty Crocker cookbook. It's been a favorite ever since.

The owner of Madame Fromage Cheese Shop in Cardiff, Wales assured me that my Welsh Rarebit was just like theirs...although, now, I regret not asking to try it while I was there. 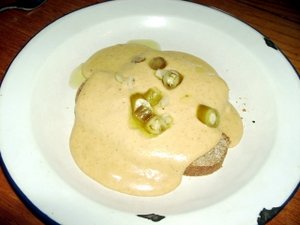 Here's the Rarebit recipe that I've developed over the years. My favorite time to serve it is the same day as someone in our family has baked fresh whole wheat bread with freshly ground wheat berries. There's just nothing like warm homemade bread covered with a generous scoop of Welsh Rarebit....ummmmmm, yummy. Enjoy.

Get a good pan. I use cast iron usually.

Put in a stick of butter. Oh....if you insist on using margarine, go ahead, but butter is better, you know.

Melt the butter and put in some freshly ground whole wheat flour. What? You don't grind your own wheat berries for fresh flour? Well....then use some regular boring white flour and stir that into the melted butter.

Add milk stirring constantly to make a nice white sauce which is more of a brown sauce if using whole wheat flour.

Grate lots of nice yellow cheddar cheese and stir it into the white or brown sauce until it melts and makes a nice thick gooey rarebit. Add salt and pepper and Worcestershire sauce to taste.

Voooowala! You have a nice Welsh Rarebit to dollop over thick slices of freshly made whole wheat bread.

Serve with hot sauce or hot peppers and you've got a meal.

This is often nice to make the same day someone bakes bread...these two just go together so well.

Sorry I didn't give you detailed measurements. I've been cooking for so many years for so many children that it sort of becomes second nature and I forget to measure...but I think you can figure it out.