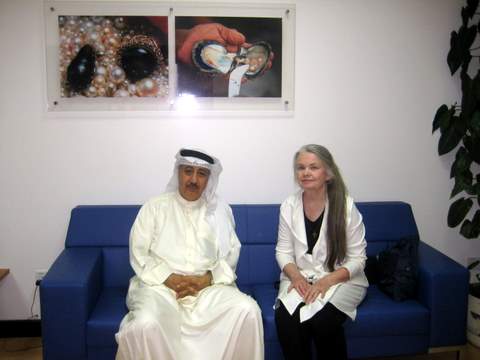 The new specialised centre is ranked among the best of its kind, Industry and Commerce Minister Dr Hassan Fakhro said.

He was speaking as he opened the laboratory, which is located at the ministry-owned Khairiya Building in the Diplomatic Area.

He also hailed the new facility as reflecting the government's keenness to promote the sector of natural pearls in the kingdom.

MUHARRAQ residents plan to take a sea trip down memory lane with a pearl diving expedition tomorrow. Four dhows and six small boats will sail from the Sayah area, south Muharraq, in the second annual Pearl Diving Day following directives from His Majesty King Hamad to preserve the area's heritage.

The objective is to keep the traditional industry, which is no longer being practised, alive for future generations, said Muharraq Governorate public relations officer Fawaz Abdulla.

"His Majesty King Hamad is always urging citizens to keep the traditional practices alive," he said.

The dhows and small boats will sail from the Muharraq jetty at around 8am to various seabeds nearby known to contain oysters.

A permanent display is now a part of the Bahrain National Museum collection. The display is part of a program designed to enlighten its people about Bahrain's history and heritage undertaken by the Information Ministry's Culture and National Heritage Directorate. Many speculate that the world's first divers were Bahraini's who took the plunge over 5,000 years ago.

The exhibition of pearls will focus on the rare pearls owned by Bahraini pearl merchant Ibrahim Mattar. A large pear-shaped pearl (known as sijna in Bahraini pearl jargon) discovered in 1976, is one of the many amazing pearls on display.

THE Pearl Pathway will cover around 3.22km in South Muharraq and will feature a natural shoreline and buildings where individuals of the pearling community lived, worked and prospered over a period of 5,000 years including residences, mosques, souqs, amaras or warehouses and Majlis - the places for special gatherings.

It will reveal the living conditions and roles of various individuals in the pearling hierarchy including the nukhida or vessel captain, the pearl divers, the men who delivered sweet water and food to the dhows out at sea, timber merchants and the medicine men.

The merchants who played such a prominent part during the pearling era will also be highlighted. There were two types - one was the ground merchant who sold his goods to traders directly and the second was the tawawish, the sea merchants or the 'brokers' of pearls who bought the gems directly from the dhow captains.

They then sold their pearls to the ground merchants or directly exported them, most specifically to Mumbai, India, which was the strongest pearl market at the time. 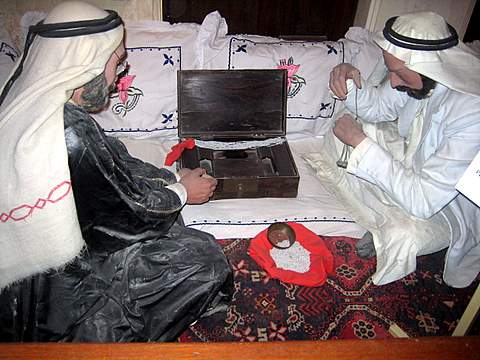 Have you found a Bahrain pearl?

Bahrain restores pearls of its heritage

Natural pearls from Bahrain once fetched the highest prices among western jewellers, prompting the likes of Jacques Cartier to visit the small Gulf state to procure them. In its heyday in the early 1900s, the pearl industry employed an estimated 17,500 people and was the lynchpin of the Bahraini economy.

These days, pearling is all-but extinct in the Gulf. The arrival of cultivated pearls from Asia punctured the market in the 1930s, coincidentally just as prospectors struck oil, turning Bahrain into the first Arab oil state. Yet the government is now trying to preserve what remains of its pearling heritage, in the hope of luring well-heeled visitors back to the islands.

The focus of the programme is the island of Muharraq , former capital of Bahrain, where 17 historic houses are being restored, many of them once owned by pearl merchants, or connected with the trade.

"Our aim is to create a journey through the historical sites," says Sheikha Mai bint Mohammed al-Khalifa, minister for culture and tourism, who has led the project. "Our goal is to have everything ready by 2011, when there is a heritage meeting in Bahrain."

Officials of the Swiss Gemmological Institute SSEF, Basel, Switzerland, and the Directorate of Precious Metals & Gemstone Testing, Ministry of Commerce Bahrain (GPTLB) have signed a memorandum of understanding that formalizes a collaborative effort in pearl research that began some years ago. SSEF’s Michael S. Krzemnicki and GPTLB’s Ali Safar signed the MoU during a working visit by Krzemnicki to Bahrain in August.

Krzemnicki said in a statement that the purpose of the MoU was “to establish mutual co-operation in research and training on pearls and to harmonize the testing of pearls, especially concerning the development of criteria for distinguishing natural pearls from cultured pearls.”

Bahrain is spearheading international efforts to find ways to detect a new type of cultured pearls that cannot be distinguished from natural ones.

The country's Pearl and Gem Testing Laboratory was the first to uncover the strong resemblance between real pearls and the Keshi type of cultured pearls.

It raised the issue at the World Jewellery Confederation's last meeting, which was held in February in Munich, Germany.

International delegates agreed that a committee, which yesterday met for the first time in Bahrain, develops scientific-based testing and identification methods.

The meeting, held at the Industry and Commerce Ministry's Diplomatic Area offices, is being attended by directors and experts from specialized pearl laboratories from across the world.

Countries taking part include the US, Thailand, Switzerland, Italy, the UK and Japan.

The two-day event will also discuss various research and scientific studies as well as results conducted by various laboratories.

Industry and Commerce Ministry director of Precious Metals and Gemstone Testing Directorate Ali Saffar told the GDN that the Keshi cultured pearls were a threat to the natural pearl trade in Bahrain and the world.

In the past, some of the world’s finest natural pearls came from the Gulf region. As early as the third millennium BC, the Sumerians may have been the first to discover the pearl, while gathering oysters along the shores of the Gulf. Gulf oysters were gathered for their mother-of-pearl, which was used as an inlay material in ancient Egypt as early as the sixth dynasty (3200 BC).

Pearling in the Gulf dates back several thousand years, taking place along natural oyster beds found in underwater geological formations known as the pearl banks. The pearl-banks pearling grounds stretch along the Arabian side of the Gulf, from Kuwait and the island of Bahrain in the west, to Oman on the tip of the Arabian peninsula at the Strait of Hormuz, and to Kish Island in Iran on the Persian side of the Gulf.

European interest in the pearl banks of the Gulf region was recorded in the early writings from Greek and Macedonian explorers, and Ptolemy wrote about the pearl fisheries which existed at Tylos, the Roman name for the present day Bahrain. In the Greek historian Pliny’s book Historia Naturalis, he wrote: “the most perfect and exquisite pearls are found in Arabia, within the Gulf.”

From the 1600s on, pearls banks were exploited in the waters around Bahrain, near Dalmah Island off Abu Dhabi, Abu Musa, Ormus, and the Lavan-Kish island group.

The exhibition is the brainchild of Ibn Khuldoon National School's Heritage Club as part of activities lined up under the theme: "We Are All One Heart". Proceeds will go towards charity works. Student Shaikha Naila bint Khalifa Al Khalifa delivered a speech stressing the importance of charity exhibitions in helping needy families. She also thanked Shaikh Lulwa and Shaikha Noor bint Rashid Al Khalifa for opening the expo and backing charity work. The programme also included a poem lauding the Premier, a folkloric show on Bahrain's heritage, old dresses and other items. Shaikha Lulwa and Shaikha Noor then toured the charity expo and were briefed on exhibited items.

Shaikha Noor paid tribute to Shaikha Lulwa for patronising the opening ceremony. Shaikha Noor, the Premier's grand-daughter, highlighted the importance of the exhibition which brings together old and modern facets of Bahrain.

It was tiny, not much larger than a grain of sugar, or as one of my companions put it somewhat prosaically, rather like a piece of chipped tooth. But it was a pearl, and I had found it myself, in a live oyster in the warm sea of Bahrain.

The allure of the pearl has captivated the Queen of Sheba, Elizabeth I and Catherine the Great, all of whom are said to have worn Bahraini pearls. Their fabulous luster is to do with the combination of the sea's freshwater springs that give the island kingdom its name -- Bahrain means "two seas" in Arabic -- and its warm, shallow, highly saline water. Whatever rare alchemy creates these lustrous objects, then as now Bahraini pearls are widely believed to be the best in the world.

Legend recounts that almost 5,000 years ago, Gilgamesh, the epic hero, landed here in search of paradise, where he is said to have found the flower of eternity, the pearl, along the shores of ancient Dilmun, now modern Bahrain. An Assyrian inscription from around 2,000 B.C. mentions "fish eyes," or pearls, from Dilmun, and Tylos, the classical name for Bahrain, was stated by Roman naturalist Pliny to be "famous for the vast number of its pearls."

So, with Bizet's opera "The Pearl Fishers" playing in my head and the enticing promise that we could keep what pearls we found, we set off for our diving expedition from Sitra island for the Al Dar Islands, 10 minutes away by motor launch. The oyster beds here haven't been harvested for 70 years and there is no limit on the number of tourists who can visit them.

This trip was for snorkelers, rather than experienced scuba divers for whom there are separate expeditions, and the sea off the islands is only chest height. The package cost 120 Bahraini dinars (euro 245) for a maximum of six people, which allowed for two hours snorkeling and two hours opening the catch. You may keep as many pearls as you can find at no additional charge.