Carlisle, England....I admit it....I was in a very bad mood during my stop here. I think you would have been too, if you had just endured following the messed up instructions I'd been given.

Bad moods are rare for me....when I travel. Usually, I'm very happy traveling, but this was ridiculous, although, in hindsight it's humorous and at least makes for a good story. As our son, Ethan says, "Pain plus time equal humor."

I had purchased an "all UK" bus pass in London, making sure, by asking several times, that it would cover the ferry cost to North Ireland. After all, North Ireland is part of the UK, right? I felt it was a fair question to ask and a fair service to expect.....and it was confirmed to me by the agents in London.

So, when leaving Perth, I asked for directions for the best route to the ferry to North Ireland. "Oh, you can't use this pass to North Ireland from Scotland. You'll need to go back to England." Now that was a surprise and I still don't understand why.

I obliged...(what else could I do?) and headed back to England. At a stop in Glasgow, I had time to window shop and do some pearl research. The wait was rather long, but the bus stop cafe gave free internet with a small purchase. I also met a friendly young lady from Finland who sported an interesting skirt. After I complimented her on it, she said it was formerly a tablecloth. I gave her a pearl ring. She surprised me by giving me a fluorite stone.

I'm trying to remember where I committed the crime. Actually, I forget, but think it may have been in Glasgow, where the drivers let me on early, because of my weird, little understood, bus pass. (Some facts escape me after so many months...).

Crime? Oh, yes, I am now a criminal, but don't worry, the next day I served my time in jail, however, not for the actual crime.....and not behind bars, either...

Oh, yes, my crime....You are dying to know what horrible act I committed, right?

Well, first of all, I was a tad bit stressed out for being sent back to England and probably unconsciously sought some comfort...so, when I got on the bus and there, in plain sight on a bus seat was a Twix candy bar, I assumed that someone had accidentally left it behind and deduced it was free for the taking.....after all, most likely, since the bus had been emptied long before, nobody would be coming back for the forgotten Twix.

And Twix had become my "comfort food" while at Antonia's in London. She purchased them for me to munch on...so I was sure the forgotten Twix was there just for me. I didn't think too long before picking it up and after finding a seat, promptly started to eat it.

Mortified, I stopped chewing, my eyes grew large and my heart stopped (well, not really, but you get the idea)....what had I done? I sat there, guilty, holding the opened candy bar in my hand and the chocolate in my mouth.

"Oh, my, I'm sorry. I thought someone forgot it. I feel terrible. Sure, I'll gladly pay for it," I said as I approached the front of the bus. I handed him some money and accepted no change. He took it, glaringly, while continuing to lecture me on not taking things that don't belong to me...

I went back to my seat and finished the bar. The last bites didn't taste quite so sweet.

Again, I was in England--Carlisle, England. As the bus driver handed me my bag from the under storage, he asked, "Is this yours?"

"Yes, it is the criminal's!" I responded with a wry smile.

"Ahhhhhhhhh......what??? I just came from Scotland. They sent me back to England. Now you say I need to go back to Scotland to use this ticket?"' Urrrrgggg....

Yes, they checked the book. They were sure. And firm.

I admit, I was beginning to wonder what the "U" in UK really meant. Weren't these countries supposed to be united....in some way?

There was a long wait for the bus back to Scotland so I had time for sightseeing, but was in no mood for it. At least I could store my rolling suitcase at the bus stop.

Attempts at being a good tourist

I grumpily trudged my way through Carlisle and stopped into Guildhall Museum, a very old building. At least the guide let me photograph this old trunk, even though photographs were not normally allowed. For a personal website he said it was, "ok". It made me appreciate museums that let me freely take photos.

I did enjoy another museum in an old house with lots of paintings. Both of these had no admission charge. I like free museums.

I really moped around Carlisle on this drizzly day....with no desire to see or do anything. Even Carlisle Castle couldn't tempt me. First of all, I couldn't get to it. There it was right across the street, but fences kept me from crossing the street. "How do they expect anyone to visit the castle, I thought?" Then, finally, after poking around, I saw an underground pass to get there.

I walked to the gate to see if I was really missing anything and asked what there was to see. They told me. I wasn't interested. For me to not be interested in seeing a castle shows you my bruised state of mind. I just couldn't see coughing up €8 for something I wouldn't enjoy. 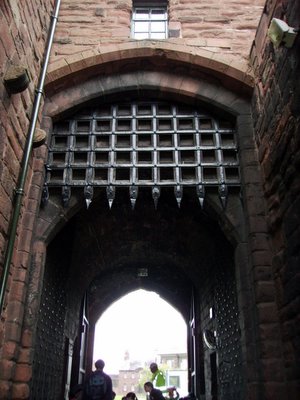 
Then suddenly, I heard, "Hey, lady, get out of the way!" Someone was yelling at me. " A car wants to get by. You're blocking the road." I was standing in the entryway and a car was wanting to pass. I scowled. Now they're yelling at me at the castle... Slowly I turned, glared at the driver and methodically moved out of the way. 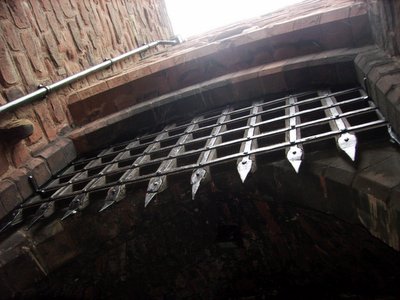 
Yes, this photo sort of typifies my victimized feelings.

I then poked around an old bookshop, but the usual thrill of looking through old books wasn't there. It just wasn't my day.

One thing I would have enjoyed seeing that day was Hadrian's Wall which isn't that far from Carlisle, but unfortunately, there wasn't enough time to make the trip to see it....maybe next time I'm popping back and forth between England-Scotland-England-Scotland....

I finally decided to find an internet connection and work on my website. Although I normally don't frequent pubs, the sign for free internet drew me in. So I enjoyed the next hour sipping diet coke and typing away. No one even yelled at me.

More trips by me after Carlisle.