In Kenya the Tridacna Gigantea (a predecessor to Tridacna Gigas) only exist as fossils as they became extinct during the later Pleistocene period around 180.000 years ago when sea levels suddenly increased about 20 meters. The algae that lives in symbiosis with the clam didn't get enough sunlight, hence the clam literally starved to death because it gets up to 70% from its food delivered by the algae. There are no records of any giant clam ever having been found in the sea along the East African coast, they are all but gone. 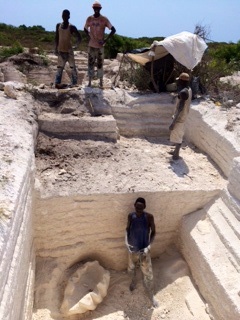 The Tridacna Gigantea was much larger (heavier) than T. Gigas, about the double weight and it is distinctly different as it's "teeth" are somewhat rounder compared to T. Gigas. The largest T. Gigas in the world was found off the Japanese Island of Okinawa in 1956 and is currently being displayed at the Natural History Museum of Dublin, weighing 300 kg. The biggest clam in my collection weighs a staggering 612 Kg, almost twice!

It needs to be pointed out that the T. Gigantea is much rarer, only 10 to 15 clams are found every month in Kenya while thousands of T. Gigas are still found in the South China Sea every month, leftovers from the meat-harvesting during the 70ies and 80ties. As such, prices are expected to supersede T. Gigas. A double T. Gigas can cost as much as 6-10000U$ while a fossil T. Gigantea was sold for 18000£ recently (28,000U$)and a smaller size fossil T. Gigantea clam (60kg) was recently sold by Bonhams auction house for 4000 U$. http://m.bonhams.com/auctions/19371/lot/3005/

The work involved finding T. Gigantea, removing them, clean and polish them takes up to 2 month but a worker gets a years salary (sometimes more depending on the quality of the clam) when he finds one. It all started off as a community project and over the years we have invested millions of Ksh into some of the poorest communities along the coastline, empowering them financially.