Cape Jason  on the Black Sea by Ordu Turkey

Cape Jason (Yason Burnu in Turkish) surprised me....as many things do when I travel within a foreign country. I'm not one for scouting out only famous places....I much prefer the untraveled back roads and discovering little or none-known treasures of a country. 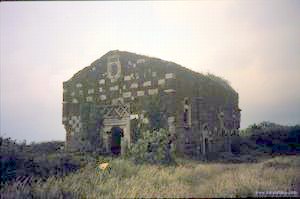 
So, when our friend, Lutfu, from Ordu, Turkey, took us to Jason's Church, as we were leaving Ordu. I didn't know any of its history until I got home and the pieces slowly started falling in place for me.

I remember wondering at the time, "Who was Jason? Was he a famous apostle? A martyr? Why was this 'Jason's Church'" The question haunted me.

At the time, I only knew I'm always fascinated with these old churches in Turkey which our muslim friends enjoy showing us. I think it's one of their ways of "connecting" with us, their Christian friends....a point of contact for them with us.

Some of our friends of friends near the Mediterranean Sea, after walking us through his gorgeous, prolific orange orchards (fresh oranges...yum, nothing quite like them), proudly showed us an ancient buried church in his pasture. Ohhhhhh.....you can't begin to know how exciting that was for me. Just imagine having a church, which was very likely over 1,000 years old, or maybe from the time of the first Christians, buried in your pasture? Enough of it was exposed to see it was really there. One could look down and see the arches.....too exciting for words.

But back to Cape Jason. It was only some time later when our family watched the movie "Jason and the Argonauts" that things started to fall into place for me about this mysterious Jason. He's the guy in search of the "Golden Fleece"....and his journey took him up the Bosporus to the Black Sea....hence the name Cape Jason. Apparently there was a temple there times ago and then this church, which is very much in ruins now, with no roof, etc. Photos? Well, I did have one, but where is it now? That's the question. This one from wiki will have to do for now.

Notice the multicolored stone blocks in Jason's Church. Undoubtedly, left over rubble and stones from the original pagan temple were used to build this church....lovely symbols of redemption.

So, is there any seed of truth in these so called "legends"? Who will ever know, but often these fanciful movies and Greek mythology are based on some historical fact that eventually gets blown out of realistic proportions.

As a side-light: Why is the Black Sea, called the "Black Sea"? Of course, I'm not sure, but the coal black sand on its beaches could give a clue. Kara Deniz (Black Sea), the Turkish word for it, is interesting when one considers the word, Ak Deniz (White Sea) for the Mediterranean Sea on its opposite shore.

Lucky place this Turkey....with so many bodies of water at its edges, but then Turkey is blessed with archaeological treasures like the church at Cape Jason beyond the fondest imagination anyway.

I was with Mark and Matt when I saw Cape Jason and with Sam when I visited my friend, Sevda, in Terme, which is also in the Black Sea region and just up the coast from Jason's church. There, in Terme, another piece of the Jason puzzle fell into place, but again, only in hind-sight.

Sevda enjoyed walking us through her city and sometimes we were accompanied by another teacher friend of hers. On one such occasion, they pointed to the hills and told us tales of huge ancient females being buried up there. That's a very interesting fact, but it would have been much more interesting if I'd known about the tale of Jason and his encounter with Amazon warrior women in the Black Sea area.

Had I been a more astute history student, or at least pondered the "Lonely Planet" a little more closely, I would have thrown them in our rented car and insisted we visit these graves....oh, the things we miss, because of lack of knowledge. But then life is too short to see, know and do all, right?

Traveling makes history come alive, and often, "after the fact".

And so, as I run across references to Jason and his Argonauts, here, there, and everywhere, like in Anne Morrow Lindberg's well-known book, "Gift of the Sea", where she describes middle life as an Argonauta shell, (which is named so after Jason's Argonauts), I can put the world puzzle together a little more completely in my mind and feel contented to know a few things about historical life on this globe.

Check out the link to wiki to get the real low-down on Cape Jason, Jason and his Golden Fleece quest. My observations are unique.

Check out my other travel insights after Cape Jason.